Back to The Atlas Blog
Regional Focus

“Farm-to-table” used to be a sign of innovation. Now, the term’s become almost ubiquitous when describing restaurants, especially those that fall into the upper echelons of dining — although even fast food and fast-casual spots are getting in on the game. To prove their eco cred, chefs and owners now are looking beyond farm-to-table to tackle other sustainability issues: how they dispose of (or repurpose) food waste and cooking oil; where their electricity comes from; the impact they’re making with their seafood choices; and how they’re sourcing tableware, décor, and other design elements.

Restaurateurs are hoping these decisions pay off, both for their bottom lines and for the earth’s. Many realize that doing business doesn’t have to conflict with doing good. You can support them when you head out for your next business lunch, whether you’re in the mood for something celebrity-helmed (ABC Kitchen by Jean-Georges, Frontera Grill), seafood-focused (The Salt Line Oyster + Ale, Seamore’s), or offering a killer view (Greens Restaurant). Here are some top picks for places in New York City, Chicago, Los Angeles, San Francisco, and Washington, D.C., that serve a midday meal with an eye toward sustainability.

The Hammer Museum has brought in two new artists to shake things up: chefs Alice Waters and David Tanis, who have taken over the courtyard dining space. When she launched Berkeley legend Chez Panisse in 1971, Waters was the voice of culinary, farm-to-table sustainability. With Lulu, she and Panisse alum Tanis are moving beyond sustainability to supporting local farmers practicing regenerative agriculture, processes aimed at reversing climate change, like crop rotation and no-till farming.

In addition to featuring green practices on the plate, the duo highlights them under the plate as well: All of the tabletops were crafted from a local fallen tree. The restaurant currently is open only for lunch, where you can choose between a three-course prix fixe menu that changes daily and a selection of soups, sandwiches, and salads.

For fine dining with a green pedigree, look no further than this spot from chef Jean-Georges Vongerichten, located in cult department store ABC Carpet & Home. The rustically elegant dining room is a showcase of sustainability, with reclaimed wood tables, vintage tableware and other found objects, and menus printed on recycled paper. On the roof, there’s a garden where the team cultivates herbs and microgreens. The rest of the ingredients are locally sourced as much as possible and adhere to strict standards: no pesticides, insecticides, or GMOs for produce, and meat from animals that are humanely treated, pasture-fed, and free of hormones.

Seasonality drives the menu, but you can expect dishes like peekytoe crab toast; black sea bass with chiles, baby potatoes, and spinach; a grass-fed beef cheeseburger; and a farro grain bowl rich with kale, golden raisins, and walnuts.

At Centrolina, there’s no guessing where your lunch is coming from — the regional farms and foragers are listed right on the menu. It’s all part of chef-owner Amy Brandwein’s philosophy of being a steward of the earth.

The four-time James Beard award nominee works with purveyors around the Mid-Atlantic area to shape her Italian menus, which feature a changing medley of ingredients. If the restaurant’s local forager partner finds black trumpet mushrooms and black truffles, they could show up in that day’s ravioli. Brandwein also has a strong relationship with DC Urban Greens, a nonprofit farm in the city that works to solve food insecurity, which supplies her with produce. Before leaving, stop into the attached Mercato, where you’ll find a variety of products used at the restaurant, including fresh produce and dairy.

If it can be cooked in a brick oven, chances are you’ll find it here. That includes chicken wings, baby back ribs, macaroni and cheese, New Jersey sea scallops, meatloaf, harissa-spiced rainbow carrots seasoned with Martha’s Vineyard salt, and a slew of specialty pizzas. Those run the gamut from four-cheese or three-meat to smoked Hudson Valley duck breast or delicata squash pies.

That’s no ordinary wood the kitchen crew cooks over, either. It’s replanted apple and cherry wood that chef Charlie Marshall, showing his true locavore spirit, sources from area orchards. He also gets his ingredients from regional farmers, spirits from regional distillers, and wines from New York State wineries. In other nods to sustainability, the restaurant eschews gas and uses electricity generated by wind power.

Chef Matthew Kenney is one of the OG innovators of plant-based cuisine, and his empire stretches around the globe. Walk through the doors at this location in the Venice neighborhood and you’ll find yourself in a sleek, minimalist dining room decorated in white and earth tones with marble accents. The real splendor is out back, where a patio oasis overflowing with greenery awaits, shaded by fig trees. The dishes that arrive at the table are works of art, bursting with from-the-market flavors and bright colors. Case in point: the vegetable lasagna, a towering creation that alternates basil pesto-dressed layers of zucchini and heirloom tomato slices, all finished with a dollop of ricotta cheese – total Instagram fodder. Don’t leave without ordering the banana cream pie, Kenney’s deconstructed take on the classic dessert.

And note: Kenney’s long-awaited Miami location of Plant Food + Wine is, at last, coming this summer.

For 35 years, celebrity chef Rick Bayless has been recreating the flavors of Mexico in Chicago, all while sourcing as many of his ingredients as possible from the Midwest. The menu calls out those purveyors, too: vegetables from MightyVine and Nichols Farm & Orchard in Illinois; fruit from a trio of farmers in Michigan; milk and cream from Kalona SuperNatural in Iowa.

For lunch, the options are many. In addition to a plentiful selection of drinks, including margaritas by the carafe, you’ll find tacos and enchiladas, tamales and taquitos, salads, sides, and soups, plus a handful of wood-grilled meats (prime rib, pork collar, chicken breast). Behind the scenes, Bayless’ commitment to going green also shows up in the restaurant’s recycling efforts: About 95% of food waste is sustainably recycled and composted instead of delivered to landfills. 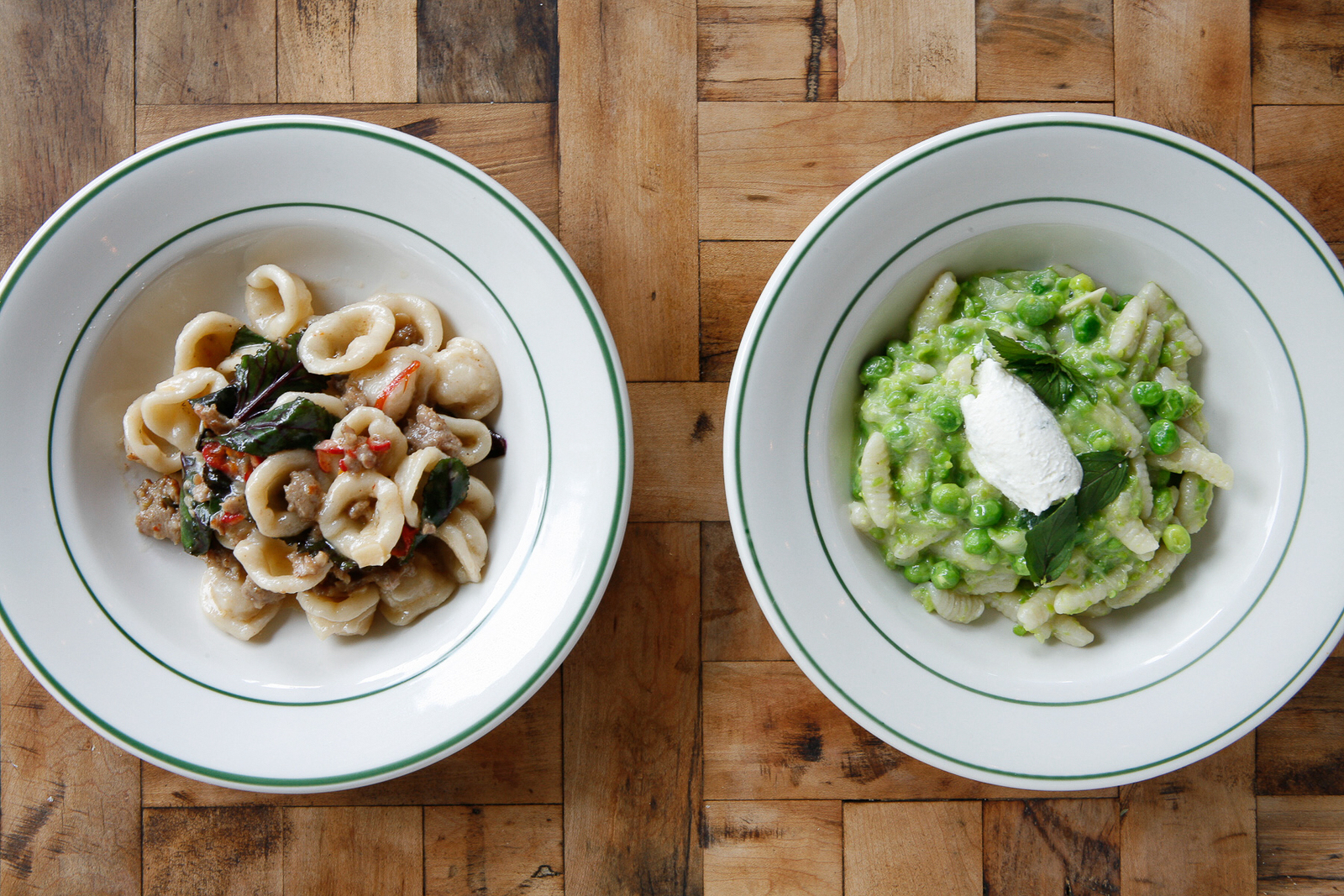 Forget farm-to-table. Rosemary’s takes its eco-pledge one step further by going rooftop garden-to-plate. When in full bloom, this green oasis provides many of the fresh herbs and vegetables that show up in the seasonally focused Italian dishes and even some of the cocktails, perhaps the rosemary gracing the Sicilian Iced Tea — it gets its kick from vodka and amaro. (A farm in upstate New York supplies much of the remaining produce.) Take advantage of the prix fixe menu at lunchtime: a salad and a pasta, with the option to add on a glass of wine. Afterward, those interested in meandering through the garden can make their way upstairs and enjoy a peaceful moment in the city.

While mainly a dinner place, on Fridays this waterfront D.C. seafood restaurant throws open its doors at noon — which, coincidentally, also happens to be when “happy afternoon” starts, starring half-priced oysters. If you’re looking for more, check out the full menu, a cornucopia of fresh-from-the-sea offerings, including the Kraken, a towering assortment of oysters, clams, lobster, and more.

Salt Line sources its bounty directly from community fishers as part of the Dock to Dish program, a community-supported agriculture-like endeavor in which participants pay in advance for the season’s catch. Deliveries revolve around what was caught that day versus preset orders, meaning you might see unusual fish varieties show up on the menu. Salt Line is also a partner in the Shell Recycling Alliance, which uses the recycled shells to raise new oysters, saving them from the landfill.

There’s one very important thing to do when planning a meal at Greens: request a table by the window. You’ll get an entrancing view of San Francisco Bay through the floor-to-ceiling windows, one that encompasses the Golden Gate Bridge and the rugged Marin Headlands. The vegetarian restaurant – founded by the San Francisco Zen Center – has been around since 1979, when the doyenne of vegetable-based cooking, Deborah Madison, helmed its kitchen.

While not immense, the menu is hearty enough to satisfy a range of tastes, whether that’s for the wild mushroom French dip, the artichoke and couscous salad, or an order of the buckwheat and feta pierogies. Much of what the kitchen uses comes from its own Green Gulch Farm in nearby Marin County; the wines are sourced from vineyards that follow organic practices. 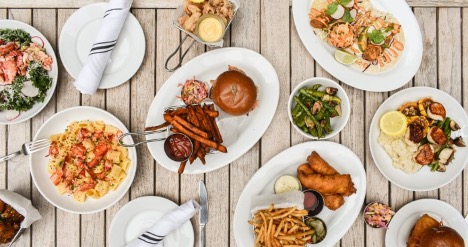 The team at Seamore’s is serious about its seafood — and sustainability. In addition to following the Monterey Bay Aquarium Seafood Watch guidelines, the restaurant only serves species whose numbers are stable or growing. Guests can get the background on what they’re eating by checking out the Daily Landings section of Seamore’s website, a list that offers information about where the fish, scallops, and oysters come from, how they were caught, and where they rate on the Seafood Watch recommendations (only “best choice” and “good alternative” species make the cut).

The fare is a pescatarian’s dream: a daily fresh catch and oyster, sandwiches stuffed with lobster or beer-battered fish, pasta with scallops, grilled shrimp tacos, lobster macaroni and cheese (a fan favorite), and a boatload more.

Bonus: A Few Other Notables

Raise a glass at A.O.C. Brentwood (Los Angeles), where you can pair your lunch with wines that are organic, biodynamic, and sustainable. At Juniper Restaurant at the Fairmont (Washington, D.C.), be on the lookout for dishes highlighting uber-local honey; it comes from beehives on the roof of the hotel. And if you’re working on the weekend in Brooklyn, make time for a late lunch at Rhodora (New York), a zero-waste wine bar that sends nothing to landfills.

One of Minneapolis’ Newest, Hottest Restaurants Is Also One of the Country’s Most Important

The Essential Spots for Colorado Dining

In Case You Missed It: Notes From the 2022 Global Business Travel Association Convention

Read Story
Hear From the Experts

We're here to help whether you’re first considering business trips or you already have a travel program.

Please select your country to view our website in your preferred language.

Thank you for the inquiry

We will get in touch with you shortly.